How People Around the World Spot American Tourists

“Where in America are you from?” the cashier asked me.

At the time, I had been studying abroad and living in Bath, England for five months, shopping at this same local grocery store multiple times a week. I considered Bath home in so many ways — I wasn’t a native, but I certainly felt that I was managing to blend in, at least. Yet the man ringing up my perishables and spotted dick (really, that’s a British dessert) somehow knew I was far from a local.

“I’m from New York,” I chortled. “Is my accent that obvious? I pronounce ‘dog’ and ‘coffee’ like a normal person, I swear.”

“No, it’s not your accent,” he began. “My friends and I play this game called ‘Spot the American,’ and the biggest giveaway is anyone wearing trainers with baggy sweat clothes out in public. People from the UK wouldn’t dream of running errands dressed like that. No offense, of course!”

Wait — running errands in a sweatshirt four sizes too big was “American”? A hoodie was my Sunday uniform; I’d never thought twice about it. I considered defending myself, but quickly realized the obvious: I was American — and stars and stripes were seeping through my pores without me even knowing it.

More so than other cultures, those hailing from the great US of A seem to unwittingly wear their American-ness on their (sweatshirt) sleeves — especially when traveling. Wear your identity proudly, but if you must blend in, you might want to consider your giveaways. We asked a pool of people from around the globe to share the easiest and most blatant ways to spot an American tourist in their home countries. 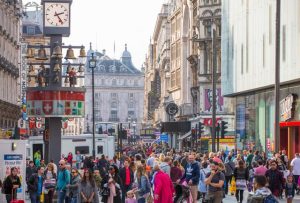 “Americans love wearing shorts, even when it’s not all that warm outside.” — Nelly, Spain

“Ill-fitting T-shirts that showcase somewhere they’ve been or a feat accomplished, like ‘Milwaukee Marathon’ or ‘Chicago Zoo’ — something embarrassing Europeans wouldn’t dare be spotted in. Then on party night, American girls wear pounds of makeup.” — Susan, Netherlands

“Americans are the ones wearing fanny packs — though I think it’s because they want to keep an eye on their wallets.” — Elio, Venezuela

“[American women wear] all the accessories — ALL of them!” — Madeleine, Israel

“Americans are used to big portions in restaurants and cafés. So when I see someone walking around Europe with more than a half-liter of coffee, that person is likely American.” — Matt, Spain

“[Coming from someone who works as a waiter] I can tell someone is American if he or she orders French fries. Like, just fries, and nothing else.” — Steffen, Denmark

“Americans go out and get college-girl drunk — it’s a big cultural difference. In Greece, we care a lot about what people think, so we grow up trying to do everything in certain ways. Plus, there was never a drinking age here [until recently when they made it 18], so as teenagers, we never felt the need to get wasted because we easily could if we’d really wanted to.” — Stavros, Greece

“Surprised faces when they are not immediately served a glass of ice water.”
— Cristina, Romania

“At a restaurant, you can often hear a group of Americans talking about how much they should tip. And they usually tip really well, since it’s not common to leave a significant sum of gratuity in Europe.” — Nelly, Spain

“They’re the first to buy you a drink. As soon as I mention that I’m Canadian and used to good beer, an American will come along in an attempt to prove me wrong.” — Karl, Canada 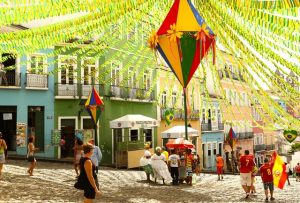 Being tourists and meeting locals

“I like the Americans who travel. They are very friendly, offering nice-to-meet-yous and are interested in learning about other cultures. I also love how all the Americans I’ve met [from the middle of America] apologize about Trump.” — Susan, Netherlands

“Bahamians are a staid bunch, and since most of us are in service jobs, they see tourists every day. But Americans are congenial and friendly to a fault, insisting on talking to the locals until their formality breaks down. Also, it blows me away how affably American tourists spend money — they’re the main reason I was able to capitalize on my business of selling $20 CDs of tourist photos. Europeans and Canadians bitch about prices, but Americans happily open their wallets time and time again.” — Ken, Bahamas

“American tourists get the most excited when they meet other Americans abroad.” — Maria, Spain

“At least in Asia, Americans are always taking pictures of the locals. And not in the National Geographic kind of way — more like how I take photos of animals at the zoo on my iPhone.” — Dan, Vietnam

“[As the dean of a study abroad program for American students] I’m reluctant to imply that all Americans are alike — it seems to me that it’s precisely in its diversity that the USA is unique and strong. But generally (and humorously) speaking, Americans are astonished by the sheer age of things in the UK, yet act surprised that most British women don’t wear bonnets. They also get really excited whenever they see sheep.” — Jonathan, UK

“I’m not saying that all Americans are overweight, but the overweight people I encounter here tend to be American.” — Barbro, Sweden

“If there’s a girl on the beach in a bikini with six-pack abs, my first thought is, ‘she’s American.’ Spanish women don’t aim for that look. It’’ custom here to eat reasonably healthy with the exception of having a beer with every meal, but since we walk everywhere, we don’t really gain much weight. Americans, however, work out to get toned.” — Beatrice, Spain 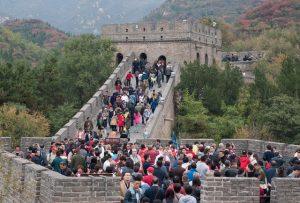 “Americans carry such huge bags! And the women fill those bags with so many curling and straightening irons.” — Allie, Australia

“A bottle of rosé wine in hand for an afternoon on the beach, paired with burnt skin.”  — Gerald, France

“Anyone holding a camcorder and shouting in awe makes for the easiest game of ‘Spot the American Tourist.'” — Kayleigh, UK

“I generally find the stereotype about Americans being uncouth and ignorant a bit tired, but their behavior abroad often seems to confirm to it. One time, a voluble American couple was on the Metro, and the husband asked the wife each time they crawled into a station: ‘Why is every station in this city called sortie?’ He had to be politely told that ‘sortie’ means ‘exit’ in French.” — Jean-Luc, France

“I’ve been asked by a couple of Americans separately on nights out whether I prefer the Beatles or the Stones. Earnest Europeans who are trying to seem cool, however, ask similar questions.” — Joe, UK

“American students exhibit a quirky mix of the formal and informal. It can take me five or six classes to get them to address me by my first name, rather than ‘professor’ (an honorific which, in English terms, I certainly do not warrant), and yet they are far more willing to be sassy and, for want of a better word, more playful than many of the English students I’ve taught.” — Rob, UK

“Americans are loud.” — Everyone

Sign up here for our daily Thrillist email, and get your fix of the best in food/drink/fun.