The ceaseless assertion that “blondes have more fun” has always baffled me. Yes, I’m a natural brunette, so you probably think I’m biased, jealous of my blonde comrades, or defensive of my chestnut locks. But it’s not really resentment that I feel toward the testimony, it’s intrigue: a person’s hair color can’t possibly directly correlate with enjoyment of life… can it?

Well, science and research suggest it can. Even back in the Stone Age, blonde cavewomen were viewed as #winning in the health and vitality departments. AND they stood out more to attract the attention of hunters. According to more recent studies, brunettes are thought to be the more rational and sensible ones, translating to the perception that blondes are more free-spirited (read: more fun). Additionally, 36% of men prefer blondes in the bedroom, while 31% fancy a romp with a brown-haired beauty. Not a huge discrepancy, but that 5% was enough to light my investigative (and slightly competitive) fire.

I needed to find out for myself what — if anything — I was missing out on as a brunette. So I decided to go blonde (for a day), take note of my surroundings and others’ reactions, and discover the answer firsthand. 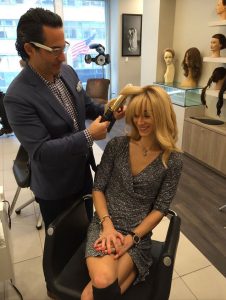 I enlisted the help of celebrity hairstylist and salon owner Angelo David Pisacreta, New York City’s top expert in couture wigs and hair extensions. If I was going to “go blonde,” I would do so all the way; in the most believable way possible, without compromising my precious virgin strands. (For those of you giggling, it just means my hair has never been dyed before. Get your minds out of the gutter.)

Angelo customized a gorgeous blonde wig for me to wear. To ensure it looked undeniably convincing, he even colored the roots darker to match my eyebrows. I was ready to go blonde! After he tucked my natural hair under the wig and styled it, I took my first look in the mirror as a platinum vixen… and truly did not recognize myself.

“Wow, what an incredible transformation!” exclaimed the blonde woman next to me, who I immediately recognized to be Aviva Drescher from The Real Housewives of New York. “You’re going to love being a blonde — well, as long as you love attention!”

I felt like a new exchange student in school who called flip-flops “thongs” and was now being looked at funny. I had so much to learn. I explained my experiment to Aviva, who is essentially the Queen Of Blondes, and she was happy to offer her veteran blonde words of wisdom.

“Speaking from experience, clothes that look sleek on brunettes can look suggestive on blondes,” Aviva explained. “It’s just the way it is. You should definitely change into something more casual for the experiment. You look great! But that hemline paired with those boots and the blonde hair is unfortunately going to get you accosted.”

I was shocked. My outfit — a dress I deliberately chose for its muted color and relatively conservative fit so as to not distract from my wig — was a number I’d frequently worn to the office. How could a change of hair color take a simple dress from pretty to provocative? 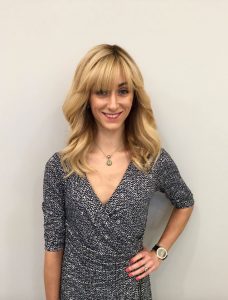 I left the salon with a full day ahead of me, venturing out into the world for the first time as a blonde. It only took a three-minute walk for me to notice a difference in people’s reactions. First, a group of construction workers stopped wheel-barrowing cement to say hello. I crossed the street, and a traffic guard whistled at me. THEN, a man driving by in an unmarked van hung out his window and shouted, “Heyyy, mami!” Not to say that as a brunette I was never catcalled by the Village People walking down the streets of Manhattan, because I was… but NOT in a three-block radius wearing what I thought was office attire. Was it my hair? Was it my clothes? Was Aviva right and it was the combo? All I knew was that I was ridiculously uncomfortable and definitely planned to change my clothes later.

I was already quite drained, so I made a Starbucks stop for black iced coffee. “What’s your name?” the barista asked me for drink identification purposes. I paused — those blonde bangs tickled my eyelashes and I just… didn’t feel like myself.

“Kimberly,” I replied with conviction.

I met my best friend Veronica* for lunch, who also happens to be a blonde. She was blown away by my makeover, comparing it to staring at the sun: “It’s very jolting at first and my eyes need some time to adjust!” she said. “You look awesome, I just wouldn’t have recognized you had I not known to look for ‘blonde Brooke.'”

Veronica was also that friend, I realized now, whose relationship status guys always asked me about. She’s gorgeous, smart, and a catch — but with my recent experience in being carnivorously catcalled just for existing, I was curious if she and her natural blondeness could relate.

“I think we do get more attention, but not just because our hair color is brighter,” Veronica said. “Blonde stereotypes have been deeply ingrained in society. We are perceived as fun and bubbly, but also dumb and easy. The extra attention isn’t necessarily a good thing.”

“Interesting!” I said. “I just hung out with one of New York’s Real Housewives, who said she’s careful about what she wears because of her blonde hair.”

“Definitely. I’m cautious with my makeup, too,” Veronica said. “Any lipstick brighter than nude makes me feel like a Barbie who’s trying too hard.”

What?! As a brunette, I’d never before thought twice about wearing a red lip color. This double standard seemed wildly unfair to the blonde community. Also, having a stricter, smaller gamut of what I could or couldn’t wear if I didn’t want to get hounded didn’t seem “fun” to me.

After demolishing a chicken pesto sandwich (hair color did not affect my appetite), an older man walked by our table and called out to our waiter, “You take care of those two pretty young ladies!” Sure, the same thing could have happened if I was my normal brunette self. Still, it felt like two blonde girls together acted as an intense force that was hard to ignore.

I walked home and sent a selfie of Kimberly to my other blonde friend Alex*. She responded immediately with, “Wig?? I know you and you would never actually dye your hair.”

Twenty-nine years of friendship proving Alex correct, I revealed my experiment and followed up with today’s pressing question: do blondes have more fun and get more attention? “Nah,” Alex answered. “I think it’s pretty equal. There are plenty of guys who prefer brunettes, including my husband before he met me.”

This was fascinating. Not only because my boyfriend had oppositely preferred blondes before meeting me, but also because my two blonde friends had such different opinions on the matter. My wig and I were being pulled in opposing directions. Luckily, next stop was the bar. 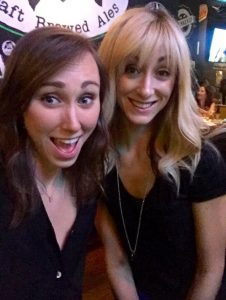 I changed into jeans and a plain black T-shirt before heading to the local watering hole to meet a strategically chosen pool of people: my sister (we look alike sans wig), my boyfriend, a friend who knew I was showing up blonde, and a friend who didn’t. The results were as follows:

Sister: She laughed and agreed we no longer looked related. She derived great pleasure from calling me “Kimberly.”

Boyfriend: He stressed that even though he previously gravitated toward blondes pre-Brooke (I like to playfully remind him of that), he hopes I never actually dye my hair. “I prefer you as a brunette because that’s what you are naturally.” Smart guy.

Friend who knew Kimberly: Before seeing me, she said she couldn’t even picture me as a blonde; but the wig looked so real, it only took her two drinks to decide it was “totally working” for me.

Friend who didn’t know Kimberly: She walked in and held a five-minute conversation with my sister assuming I hadn’t showed up yet — I was sitting RIGHT next to her. I called her name three times until she realized it was me; her jaw proceeded to drop.

Random man on the subway: Grilled me like a shish kabob with his eyes the entire ride, even in my casual wear
“Fun” is in the hair of the beholder

Going blonde for a day was definitely an enlightening experience. The fact that a) I felt SO different with the wig on that I brought to life an alter ego named Kimberly, and b) my friends and family didn’t even recognize me with my platinum locks, revealed just how big of a role hair color plays in forming your identity. When any woman — blonde OR brunette — alters the color of her hair, she knows a shock value comes with it. You feel as different as you look. And that can be kind of fun!

But do blondes have more fun overall? I agree with Aviva and Veronica that they do get more initial attention… which isn’t really fun when it’s predatory and you can’t wear certain things without being judged. (Being called pretty in a restaurant? Yes please. Being whistled at and stared down by multiple men in two different outfits? Hard pass.) While I personally think I looked pretty damn good in the blonde wig, at the end of the day, I definitely still identify as a brunette — that’s when I feel like the real “me.” My boyfriend can rest assured that I’ll be skipping the bleach. For the same reason Alex’s husband fell in love with her blonde self despite his prior brown-haired penchant, it goes to show that hair color preference is a “type”… it isn’t everything. Long-term “attention” comes from confidence and just being yourself.

*Real-life blondes whose names have been changed

Brooke Sager is a contributing writer for Thrillist and a brunette. She kind of misses Kimberly. Follow her adventures in NYC and beyond on Instagram and Twitter: @HIHEELZbrooke. 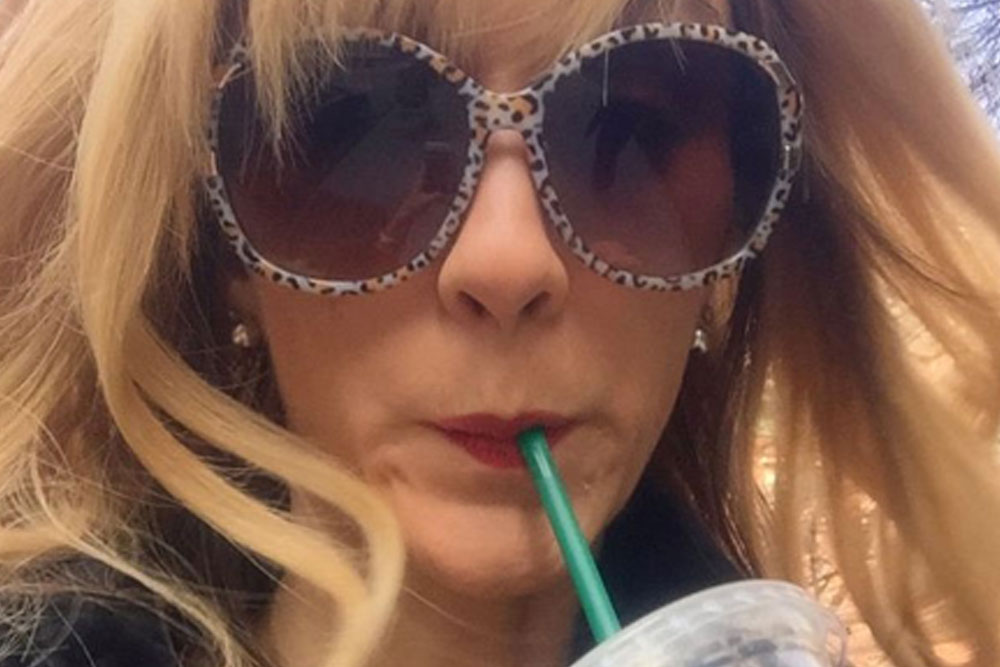