If You’re a Worrier, You Might Be a Creative Genius

Everyone has that friend who weighs each pro and con when deciding what restaurant to eat at; the sibling you’ve talked off a ledge when her boyfriend hasn’t called and she’s sure he’s bleeding out in a ditch; the co-worker who won’t take the subway because of the infinite number of disasters that can occur in a tunnel underground.

If you’re the easygoing, carefree type, you probably think that other person is nuts. You can’t relate to all that overthinking, so you’ve likely daydreamed about strangling him/her. But play nice, because you wouldn’t want to be responsible for depriving the world of the next Charles Darwin or Alanis Morissette, now would you? According to new research, your “crazy” friend/sibling/co-worker might be a creative genius.

Why does neuroticism tend to indicate unhappiness?

When you think of the “neurotic” personality, you can probably understand its evolutionary value: people who are hyper-sensitive to threats would tend to escape them and survive. But why does that trait tend to be associated with both unhappiness and creativity? After all, if you survive, you should be happy.

Researchers theorized that the answer lies in the strong link between anxiety in humans and overactive imaginations. As explained by Dr. Adam Perkins, expert in the neurobiology of personality:

“It occurred to me that if you happen to have a preponderance of negatively hued self-generated thoughts… and you also have a tendency to switch to panic sooner than average people… then that means you can experience intense negative emotions even when there’s no threat present. This could mean that for specific neural reasons, high scorers on neuroticism have a highly active imagination, which acts as a built-in threat generator.”

In other words, you have to be creative if you’re going to imagine and anticipate all the evils that might happen, even when — especially when — the world around you appears fine and dandy. And just like that, my entire existence as a writer makes sense.

Creative people tend to be self-starters

In describing the mechanism of neuroticism as “self-generated thought,” the researchers essentially hit on an alternative definition of creativity. After all, what is being creative if not continuously generating your own thoughts that may or may not relate to pesky considerations like “reality”?

This also makes sense to me. I started writing fiction at the ripe age of 5 — I was “that kid” who would pen short stories about swamp monsters and teddy bears coming to life (yup, I wrote the original Ted screenplay) instead of playing hopscotch at recess. In fourth grade, I hand-wrote, in a pink notebook that was covered in cats, an entire novel about the trials and tribulations of a teenage girl. (You’re correct in assuming I didn’t get a boyfriend until high school.) I went on to major in creative writing in college. Now writing is my moneymaker, and my version of getting high on life still involves creating character outlines and neatly tying plotlines together in great, big crafty bows.

Needless to say, I’ve always had a very active imagination, which proves to be a huge asset during the creative process. But the same study suggests that self-generated thought also causes unhappiness. While I consider myself to be a happy person overall, this still fits in with the recognizable patterns in my life. Creatives can’t turn off their creativity, which means my wily mind is often going HAM in real-life situations, too. That’s when my inability to not overthink the little things can be hindering and upsetting.

One time, I wholeheartedly convinced myself I didn’t get a big job offer because I wore a pink bag and everyone else in the office seemed to be wearing black. Another time, I invented a scenario in which my boss saw a personal G-chat conversation that I left up on my monitor; even though I distinctly remembered shutting my computer down, I was so worried that I took the bus back to my office to double-check. And one time (… a zillion times) a guy took all day to answer my text. It only takes me about 16 minutes to craft an elaborate story in my head about how said male wants to end things because my last text was too eager or because there’s a zit on my chin.

Deep down, I know my negative and panic-induced theories sound… well, unlikely. And crazy. Which is why I don’t ever voice such ideas out loud. But I’ll still run possible circumstances through my head and “watch” them unfold like a work of fiction, because that’s what my brain is good at doing. Sometimes, I’ll kinda, sorta believe myself.

There’s a lot of truth to the “depressed artist” stereotype

Given all this, and given what you likely know about famous creatives, you can see why self-generated thought and neuroticism can lead to both creativity and unhappiness. When your brain constantly churns out hypothetical scenarios and narratives, reality (whatever that is) may not take precedence over the scarier, more disastrous plotlines. Maybe you’re a ball of anxiety, but maybe you’ll also turn that anxiety into “The Scream.”

To think, some people are just rational from the get-go! I always envied and wondered why my laid-back friends and my level-headed sister who works in data don’t sweat the small stuff… or, you know, get stomachaches over tardy text messages. Then Dr. Perkins explained it perfectly:

“Cheerful, happy-go-lucky people by definition do not brood about problems, and so must be at a disadvantage when problem-solving compared to a more neurotic person. We have a useful sanity check for our theory because it is easy to observe that many geniuses seem to have a brooding, unhappy tendency that hints they are fairly high on the neuroticism spectrum. For example, think of the life stories of Isaac Newton, Charles Darwin, Vincent van Gogh, Kurt Cobain, etc. Perhaps the link between creativity and neuroticism was summed up most succinctly of all by John Lennon when he said: ‘Genius is pain.'”

It’s true that my self-generated thought has never led me off the deep end — like, I’ve never come close to overdosing on drugs or cutting my ear off. But it’s still reassuring to know that science doesn’t see us creative minds as insane. Just insanely imaginative. 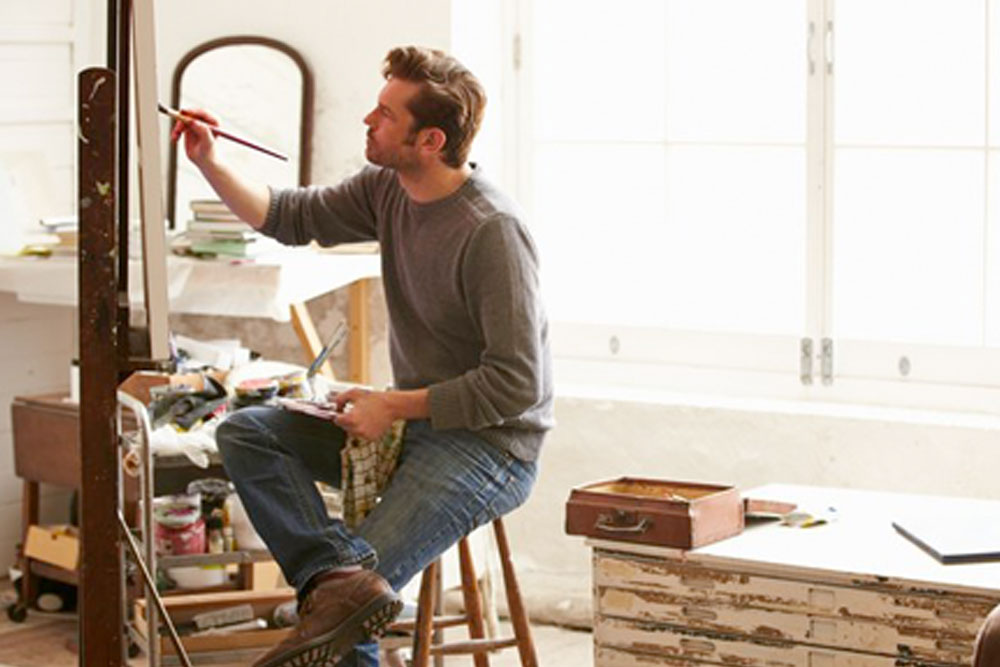